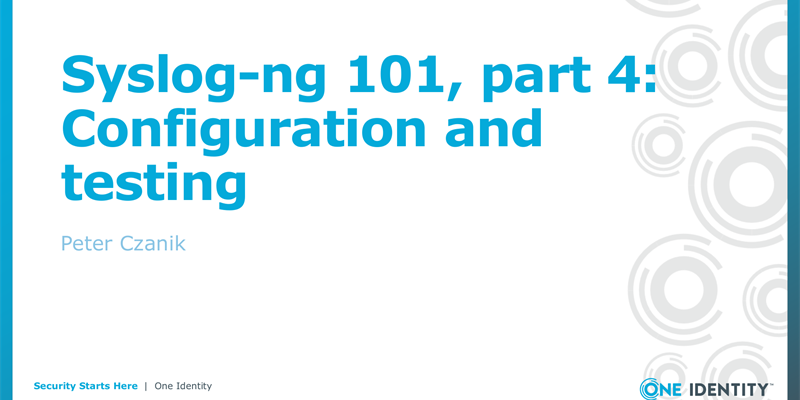 This is the fourth part of my syslog-ng tutorial. I hope that since the previous part of my tutorial, you successfully installed syslog-ng. In this part we will finally work with syslog-ng, not just learn about the theoretical background. We will do basic configuration and testing.

You can watch the video or read the text below.

Any time I try to explain the syslog-ng configuration, my initial recommendation is: “Don’t Panic” (see: https://en.wikipedia.org/wiki/Phrases_from_The_Hitchhiker%27s_Guide_to_the_Galaxy#Don't_Panic). It is simple and logical, even if it looks difficult at first sight (and often also at second sight…). The syslog-ng configuration follows the pipeline model. There are many different building blocks: sources, destinations, filters, parsers, and so on. These building blocks are connected into pipelines using “log” statements in the configuration. You can have multiple pipelines and use the same building blocks in multiple log statements.

Let me show you a syslog-ng configuration file, which is pretty minimal, but still contains most of the typical configuration elements. It has everything to generate a typical /var/log/messages file from the default log sources of the host.

We will learn about the various elements in further detail later, in this part I only give you a quick overview. The syslog-ng configuration starts with a version number declaration. It ensures that syslog-ng works as expected even after an upgrade.

You can include other configuration files. SCL in the scl.conf file name stands for Syslog-ng Configuration Library. Many syslog-ng drivers are defined in SCL, not in the code. You need this for example for the Elasticsearch destination.

You can place comments in the configuration with a hashtag.

Next, you can find a couple of building blocks: a source, a destination and a filter.

The configuration ends with a log statement, which connects the three building blocks together.

You will often test new syslog-ng configurations in the foreground. This way you can find configuration problems faster and easier. You can also easily stop syslog-ng using ^C.

There are various tools you can use to test syslog-ng:

Do the testing on a host where logging is not a mission critical function, as logging will often be unavailable while testing.

As a first step, we stop the running syslog implementation. Most likely it is syslog-ng, so,

should work. Keep in mind, there are some operating systems, which allow multiple syslog implementations to be installed in parallel, so your mileage may vary. Stopping the running syslog allows you to use the same syslog-ng configuration on any operating system to collect local log messages.

Using your favorite text editor, save the configuration you have seen at the beginning of this tutorial to a file called first.conf, then start syslog-ng using this configuration in the foreground with debug messages:

From another terminal use logger to send a test message:

When you check the /var/log/messages file, the test message should be there, close to the end of the file:

If you have questions or comments related to syslog-ng, do not hesitate to contact us. You can reach us by email or even chat with us. For a list of possibilities, check our GitHub page under the “Community” section at https://github.com/syslog-ng/syslog-ng. On Twitter, I am available as @PCzanik, on Mastodon as @Pczanik@fosstodon.org.