Normally I cover free and open-source software in the syslog-ng blog. But recently quite a few members of the community reached out to me and asked about collecting logs from Windows. So, I prepared a quick overview of the topic. The good news is, that syslog-ng supports collecting logs from Windows in multiple ways. The not so good news is that Windows support is only available in the commercial version of syslog-ng.

There are multiple ways for collecting log messages from Windows. You can either install syslog-ng agents on Windows hosts, or you can use the Windows Event Collector (WEC) component of syslog-ng PE.

Note, that a third version was also available for a while but discontinued due to lack of users: running a syslog-ng server on Windows.

The drawback of using the syslog-ng agent for Windows is that it is yet another application to push through security and operations teams and install on each of your hosts. If all you need is collecting Windows eventlog then Windows Event Collector is a good alternative.

WEC first appeared as part of the syslog-ng PE 7.0.6 release. It can collect Windows eventlog messages pushed through encrypted HTTP messages to the Windows Event Collector. As you can see, forwarding logs from text files is not supported, only Windows eventlog. On the other hand this also means that there is no need to install anything on Windows hosts. WEC is an optional component of syslog-ng PE running on Linux. It is installed as part of syslog-ng PE but you need to configure and enable it separately.

Starting with the latest version of syslog-ng PE you can also enable WEC clustering. Using multiple WEC instances was an option earlier as well,but starting with syslog-ng PE 7.0.23 WEC can also collect eventlog forwarded through a load balancer. This helps with any scalability issues you might encounter when using WEC with a large number of endpoints. 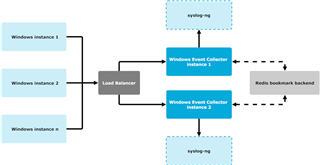