To find the pattern that matches a particular message, syslog-ng uses a method called longest prefix match radix tree. This means that syslog-ng creates a tree structure of the available patterns, where the different characters available in the patterns for a given position are the branches of the tree.

To make the message classification more flexible and robust, the patterns can contain pattern parsers: elements that match on a set of characters. For example, the NUMBER parser matches on any integer or hexadecimal number (for example 1, 123, 894054, 0xFFFF, and so on). Other pattern parsers match on various strings and IP addresses. For the details of available pattern parsers, see Using pattern parsers.

Pattern matching based on regular expressions is computationally very intensive, especially when the number of patterns increases. The solution used by syslog-ng can be performed real-time, and is independent from the number of patterns, so it scales much better. The following patterns describe the same message: Accepted password for bazsi from 10.50.0.247 port 42156 ssh2

A regular expression matching this message from the logcheck project: Accepted (gssapi(-with-mic|-keyex)?|rsa|dsa|password|publickey|keyboard-interactive/pam) for [^[:space:]]+ from [^[:space:]]+ port [0-9]+( (ssh|ssh2))?


The structure of the pattern database

The pattern database is organized as follows:

Figure 18: The structure of the pattern database 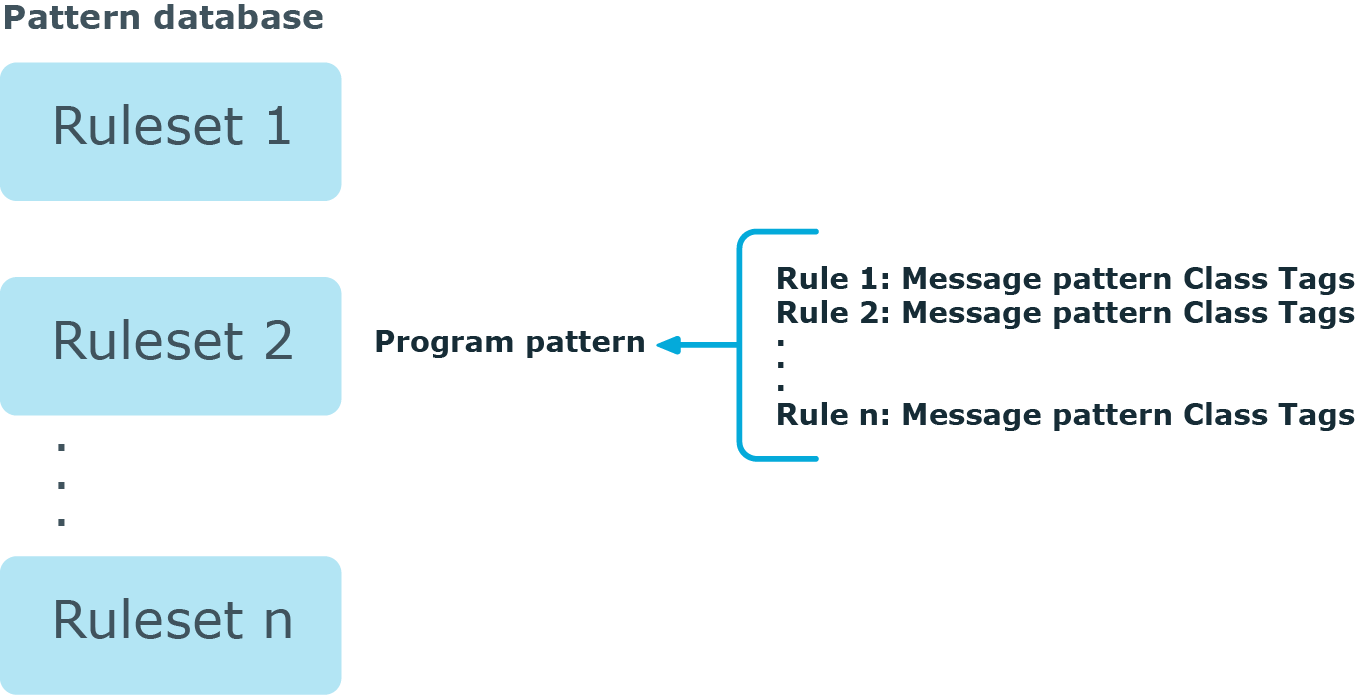 Was this topic helpful?

Patterns can consist of literals (keywords, or rather, keycharacters) and pattern parsers. Pattern parsers attempt to parse a sequence of characters according to certain rules.

When a new message arrives, syslog-ng attempts to classify it using the pattern database. The available patterns are organized alphabetically into a tree, and syslog-ng inspects the message character-by-character, starting from the beginning. This approach ensures that only a small subset of the rules must be evaluated at any given step, resulting in high processing speed. Note that the speed of classifying messages is practically independent from the total number of rules.

For example, if the message begins with the Apple string, only patterns beginning with the character A are considered. In the next step, syslog-ng selects the patterns that start with Ap, and so on, until there is no more specific pattern left. The syslog-ng application has a strong preference for rules that match the input string completely.

Note that literal matches take precedence over pattern parser matches: if at a step there is a pattern that matches the next character with a literal, and another pattern that would match it with a parser, the pattern with the literal match is selected. Using the previous example, if at the third step there is the literal pattern Apport and a pattern parser Ap@STRING@, the Apport pattern is matched. If the literal does not match the incoming string (for example, Apple), syslog-ng attempts to match the pattern with the parser. However, if there are two or more parsers on the same level, only the first one will be applied, even if it does not perfectly match the message.

If there are two parsers at the same level (for example, Ap@STRING@ and Ap@QSTRING@), it is random which pattern is applied (technically, the one that is loaded first). However, if the selected parser cannot parse at least one character of the message, the other parser is used. But having two different parsers at the same level is extremely rare, so the impact of this limitation is much less than it appears.

Artificial ignorance is a method to detect anomalies. When applied to log analysis, it means that you ignore the regular, common log messages - these are the result of the regular behavior of your system, and therefore are not too interesting. However, new messages that have not appeared in the logs before can sign important events, and should be therefore investigated. "By definition, something we have never seen before is anomalous" (Marcus J. Ranum).

The syslog-ng application can classify messages using a pattern database: messages that do not match any pattern are classified as unknown. This provides a way to use artificial ignorance to review your log messages. You can periodically review the unknown messages — syslog-ng can send them to a separate destination, and add patterns for them to the pattern database. By reviewing and manually classifying the unknown messages, you can iteratively classify more and more messages, until only the really anomalous messages show up as unknown.

Obviously, for this to work, a large number of message patterns are required. The radix-tree matching method used for message classification is very effective, can be performed very fast, and scales very well. Basically the time required to perform a pattern matching is independent from the number of patterns in the database. For sample pattern databases, see Downloading sample pattern databases.